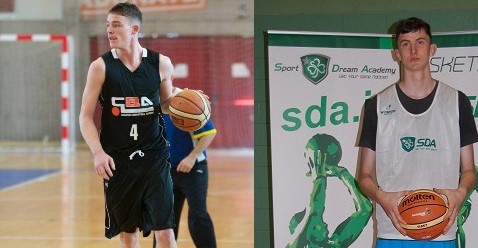 This week both, Jordan Blount and Cian Sullivan have taken massive strides forward in their basketball careers. Both SDA athletes this week have officially committed to play Division 1 basketball with two top American Colleges. Cian has joined the very talented LaSalle of Philadelphia, lead by head coach John Giannini. Jordan will take his talent to University of Illinois-Chicago, under the guidance of head coach Steve McClain.

For Cian, it hasn’t taken long. Cian started back in September of this year and 9 weeks into his year at the prestigious prep school of St.Andrews, he has been offered a place at LaSalle University. Cian has attended SDA two years in a row and has been the most improved player over the past two years with us. “It is a dream come true, and I am focused on both basketball and academics. I would like to thank SDA and especially Coach Pete for all they have done for my athletic and personal development” – Cian Sullivan.

For Jordan, this week sees him join an excellent athletic and academic college. Jordan has committed to University of Illinois-Chicago. This is a major step forward for Jordan and his basketball career. SDA was delighted to have Jordan take part at our 2015 invitational camp. This year he was the 3-point contest winner and camp MVP. Jordan’s hard work has taken him to a level which is unmatched, this summer Jordan was top scorer for Ireland at the European championships. This was the start of what is only going to become a very bright and successful future for Jordan.

SDA would like to wish both our camp members every bit of success for the coming seasons.