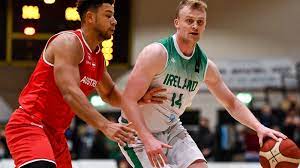 SDA star John Carroll had an excellent Irish Men’s Euro Qualifier campaign before suffering an unfortunate injury before the final game against Switzerland. In 2022 John was a consistent leader in both points and rebounds while captaining the national team to a successful small nations tournament win and a positive Euro qualifier campaign.
John attended the very first SDA Elite Invitational Camp to compete against the best in Ireland and to support his dream to continue his development in the USA. After a wonderful performance at camp John was awarded the Camp MVP in addition to being the camp’s 1v1 and three point contest winner. John’s excellent performance led him to get attention from numerous prep schools and colleges in the USA. John’s SDA experience led to John enjoying a standout season as a postgraduate at The Hill School in Pottstown, PA.
Consistently the top-scorer at The Hill School, averaging just under 20 points per game and grabbing nine rebounds per game, John helped lead The Hill School to a 20-3 record which included the school’s first-ever Pennsylvania Independent School Athletic Association (PAISAA) State Championship.
As a result John earned a scholarship to Hartford University under the guidance of head coach John Gallagher where he competed in the America East Conference, Division I (NCAA). John finished his excellent collegiate career as a 1,000 point scorer at Hartford University. In his senior year Hartford made the daunting trip to Cameron Indoor Stadium to take on Duke where Carroll faced future NBA stars Zion Williamson (New Orleans Pelicans) and RJ Barrett (New York Knicks).
After graduating from college John continued to excel in both his professional basketball career (Spain) and International basketball career where he did a great job as captain this year.
“SDA was key for me to get seen by a number of schools in the USA. Following the SDA Elite Invitational Camp I accepted a scholarship to play at the Hill School, PA. From there I played D1 at Hartford and have pursued a professional and International career. None of this would be possible without SDA and I recommend it for any top Irish student-athlete” – John Carroll (Irish International)
SDA wants to wish John a speedy recovery and continued success in his professional and international basketball career.

Register your interest in the 2023 Elite Invitational Camp now!

The SDA Elite Invitational Camp is back in 2023!

SDA runs Ireland’s most Elite basketball camp where the best student-athletes in the country are invited to compete against the best, develop their skills through top coaching, and help to get their game noticed in the USA. Register your interest now

SDA is launching a brand new Athlete Profile Service to give student-athletes the power to pursue their dreams in the USA. Stay tuned for updates soon! [more]

SDA is delighted to partner with HOOPSLife to help support the growth of Irish basketball development into the future. Learn more about HOOPSLife HOOPSLife

Effective leadership is essential in any sports organisation, both in the boardroom and on the training pitch. Leadership in Sport is the first textbook to examine sports leadership in the round, across both management and coaching environments [read more]