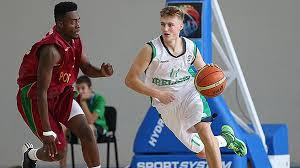 SDA is delighted to announce that Sean Flood (2015 SDA Elite Invitational Camp Co-MVP) is following his dream to play hoops in the USA where he will bring his talents to the Sante Fe Saints Junior College team in Florida. Sean is one of the top young players to come out of Ireland within the last year where he was named Premier League Young Player of the Year. Sean was instrumental in Templeogue Basketball Club winning the Men’s National Cup for the very first time and played a starring role for Ireland at the FIBA U20 European Championships in Greece, finishing the tournament in the Top 5 PG’s.

“Sean is a very gifted player who can really shoot the ball. But most of all he is a natural leader, and coaches like seeing a young guy who takes a leadership role early on. I think that Sean could do very well at the Juco level if he continues to work on his physique, strength and quickness” – Coach Pete Schwethelm” (SDA Coach 2013-2016).

Sean was a standout athlete at the 2015 SDA Elite Invitational Camp where he won Camp Co-MVP and the 3-Point Contest. He showed true leadership skills throughout that camp and impressed a number of American college coaches with his shooting ability, decision-making and character. Sean’s 2015 SDA Camp highlights and SDA Player Profile put his talents in the shop window and served as the starting point for many interested American prep school and college coaches. Sante Fe College proved to be the most keen to get Sean on board given the fit between Sean and Sante Fe’s athletic and academic requirements.

“SDA was extremely helpful in both developing my skills at the Invitational Camp, and then getting my game out there through my highlights and through the SDA Player Profile – these tools were so important in getting me the exposure I needed to go follow my student-athlete dream to play and study in the USA. Every young athlete who is serious about reaching their potential should be a part of SDA” – Sean Flood
“We are very grateful for the support and guidance SDA has provided both Sean and ourselves as his parents – it made the process much clearer and SDA is an invaluable service to any aspiring Irish student-athlete out there who wants to get noticed” – Margaret Flood (Sean’s Mother)

Sante Fe are a top Junior College who compete at a very high level under head coach Chris Mowry. This will be a tough challenge for Sean, both in the classroom and on the court, but he has the ability to succeed and SDA would like to wish Sean the best of luck in his next student-athlete adventure.

“Sean has been a great addition to SDA both as a standout player in 2015 and as a coach in 2016. He is a role model to many of the young aspiring athletes and he takes great care in helping them improve. His future is bright if he continues along the track he is currently on and works hard both on the hardwood and in the classroom. We all wish him the best” – Dr. Paul Cummins (SDA Founder)