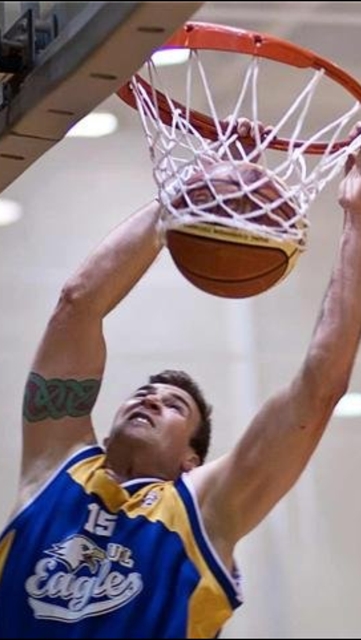 The Stuart Robbins Scholarship provides an annual scholarship to an invited elite Irish athlete (between the ages of 15 – 18) for the duration of the SDA Elite Invitational Camp.

Stuart Robbins was a 33 year old Welsh basketball player from Port Talbot in South Wales at the time of his death on April 12th 2010. Stuart played at centre for the London Towers and Thames Valley in the British Basketball League and professionally in Germany, Belgium, New Zealand and finally in Limerick with UL Eagles. Stuart grew up as a fine athlete but turned to basketball late and after attending a prep school in the USA received a scholarship to play college basketball at NCAA Division One Saint Joseph’s University in Pennsylvania.

Stuart was an extremely hard worker and made the very best of the skills he had to forge himself a very successful career playing basketball at the highest standard with appearances for London Towers in the Euro League.

Stuart arrived in Ireland at the start of the 2009 season and joined the UL Eagles were he already had many friends from previously coaching on Irish camps and helping out with National Team sessions. Whilst in Limerick Stuarts huge personality and size made him a big hit with the kids he coached, his team mates and the limerick public.

Sadly Stuart passed away in in sleep just a couple of weeks after leading the Eagles to one of their most successful seasons in years which saw him receive the Superleague player of the year award. Stuart’s death came as a big shock to the Irish Basketball Scene and he is greatly missed by many in the sport every day.

Stuarts contribution to the sport in ever country he played and especially in Ireland was immense and inspiring to many players and his memory lives on with the annual Stuart Robbins Memorial Tournament in Limerick every September.

With this Scholarship Stuarts parents Des and Jayne Robbins hope that other young basketball players will get the chance to accomplish all their hopes and dreams just as Stuart did.

The Mike Franz Scholarship provides an annual scholarship to a young athlete (between the ages of 8 – 15) in Kildare for the duration of the SDA Kildare Academy Sessions.

This scholarship is in memory of Mike Franz (1957-2012), beloved husband of Catherine and loving father of Rory, Daniel and Katie. US-born Mike Franz coached basketball at the Holy Family Secondary Girls School in County Kildare for 20 years. Mike was a much loved basketball coach and a highly valued member of the Newbridge community where his larger than life character made a positive impression on those he met.

Mike coached the Holy Family Girls basketball team for years and led them to to an All-Ireland Championship. Mike is fondly remembered by each member of every Holy Family team he coached during his tenure. Basketball was Mike’s main sporting passion but he was an avid sports fan who was ever knowledgeable on all things sport related.

Mike is fondly remembered by the Irish basketball community where he left a highly positive impression on those he coached, many of whom have since come through the ranks and have participated in both Hoopsclinic and SDA basketball initiatives. Mike’s character and big personality was infectious and SDA is honoured to offer a scholarship in his memory.

The Mike Franz Scholarship is for developing athletes in Ireland who demonstrate a passion to improve their basketball ability, a competitive drive, a strong work ethic and a love for the game of basketball.

To apply for the Stuart Robbins and Mike Franz Scholarship please complete the following within the word-count and hit ‘send to SDA’:

What is your ambition within your sport?
Why should you be chosen for the ‘Stuart’ SDA Scholarship?
Email Address: